In Search of a Smarter Maintenance Plan

I wrote a blog post about Implementing Maintenance Plans a while back.  In it I suggested that if you have time to rebuild the indexes once a week, you should go ahead and do it.

But what if you DON'T have time?

I suggested rebuilding the indexes once a week.  And the bog standard maintenance plan rebuilds every index, whether it needs it or not.  But if things are heavily fragmented, or there are a lot of indexes with millions of rows each, that might take an awfully long time.  I would expect heavily fragmented indexes to adversely affect performance, so set up a Smart Rebuild / Reorganise job to run as part of the weekly maintenance plan. 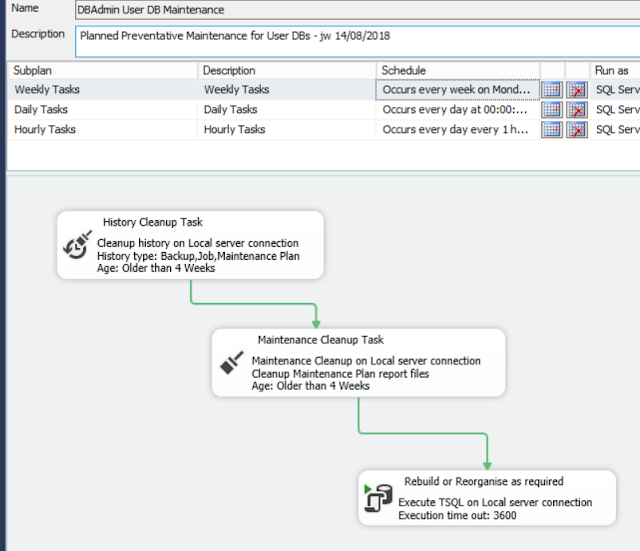 Instead of the usual Rebuild Index task, grab the Execute T-SQL Statement and add it to the maintenance plan.  You can restrict the run time with the Execution Time Out parameter - specifying 3600 seconds means that after an hour the job fails, so that it does not over-run the maintenance window.  Note that if it hits that time out, the job will fail, so I have put this step last.  It will also send an error message email if you have it set up to do so. 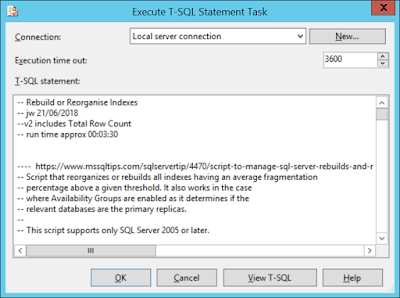 If the database is badly fragmented, you might want to run this daily, at least until they are under control.

I also set up a job to update statistics.  Statistics can get out of date, and queries may be less efficient because of this.

Updating statistics is a bit of a funny one.  If you rebuild the indexes, you get a nice new set of statistics.  But if we are not rebuilding the indexes, you have to rely on Microsoft to do it as it thinks fit, according to its algorithm.  Sod's Law says that it won't update the ones you want it to update.  The SQL execution plan can ignore a perfectly good index because the statistics are not up to date, and may take far longer to run a query because of this. 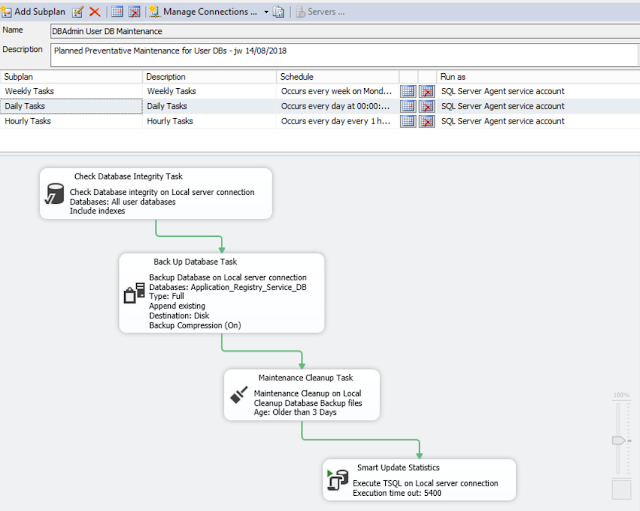 As before, I added a T-SQL task to the Daily tasks,  last in the line.
I've given it a timer limit of 5400 seconds (an hour and a half, to save you getting your calculator out)
And it runs a stored procedure which I found here...
Thanks to Bill Graziano! 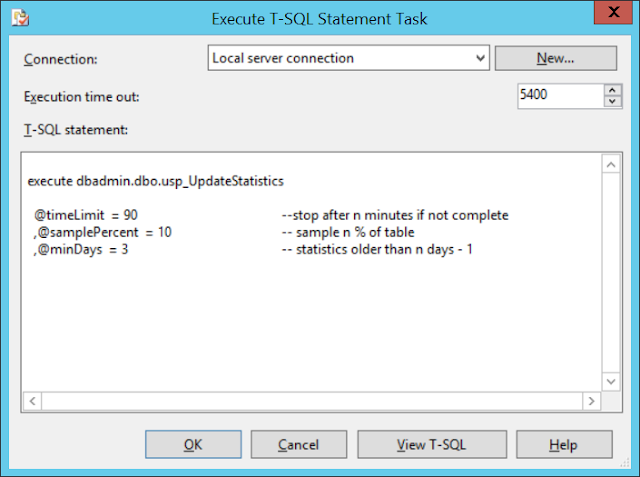 Note that Bill's script sets a time limit too, so I don't really need to set an execution timeout.

There's an alternative to the above - the well regarded and reputable scripts from Ola Hallengren.
A lot of people swear by them.