What I Did On My Hols

Yes, I know it's nothing to do with DBA Tasks, but you don't have to read it if you don't want to! 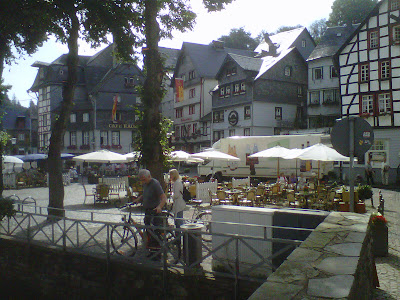 I went to the Eifel National Park.  No relation to the famous tower – two effs - but a landscape of steep wooded hills and lakes just over the Belgian border in Western Germany, about four hours drive east of Calais.  Imagine the Lake District with far more trees and far fewer tourists, and little medieval villages like Monschau full of half-timbered houses.  The warm sun shines on open air cafés serving beer with Wienerschnitzel (not every stereotype is false).
Put on your walking boots or get on a bike and wander round the hills and lakes - this is what people do here.  Take a boat trip on the lake and walk back.  Cycle lanes and footpaths abound, making for lots of white paint at road junctions.  (Remember to wait for your pedestrian traffic light, even if it’s 3am and there’s nothing coming - the cops enforce jaywalking laws with 100 euro on the spot fines.  Ditto cyclists).  Once you get away from the main routes, a detailed map would be handy - I wasn’t impressed by the signposting on the footpaths.  Those of you adept at reading between the lines will realise that this means I got lost. 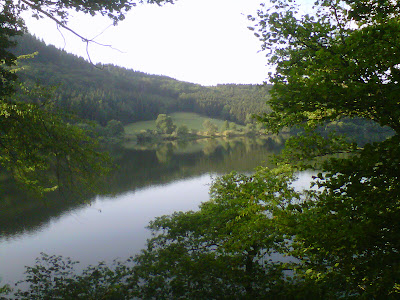 The village is Gemünd, which is close to Schleiden.  There’s another Gemünd near Bitburg somewhere, and lots more places called Gemunden, so be careful programming the satnav.  Nearest big towns are Aachen to the north, Köln to the east.
Accommodation is in a series of apartment blocks.  All the flats have a balcony I think,  but sadly although there are great views to east and especially west, our block faced south so we gazed at the closed shutters of the empty block next door.  Good sized living room with sofa bed, with galley kitchen and small verandah; smallish double bedroom; shower/wc. All fine for a week.  There’s one flat for sale with an asking price of 60,000 euros - you wouldn’t get a flat of this quality for that kind of money in the UK.
What it doesn’t have on site is a restaurant or bar; nearest is the Salzberg 500m down the hill.  We found Aristotle’s rather smart Greek restaurant at the bottom of the footpath from the top of the complex down to the valley; a steep climb home...  Apart from that you need to  go down into Gemünd itself about 1.5 km away down a steep hill, where there are probably a dozen quiet bars and restaurants, so it’s probably not a resort suitable for party animals.  Although I admit I didn’t try the sauna.
Speaking of party animals having to make their own entertainment with their kit off - dominating the skyline to the west is the tower of Ordensburg Vogelsang (look it up on Wikipedia).  The National Socialists used to bring the best and brightest hunky blond young Aryan men to this training establishment and inducted them into a secret cult which involved them going into a secret room in the tower decorated with a big mural of the perfect German man. Who just happens to be naked.  You may wish to roll your eyes at this point.  After the war the place was used briefly by the British and then the Belgian army, who built a huge barracks block that Albert Speer would have admired, and replaced all the German eagles with Belgian heraldic lions.
Off to Köln for the day, starting with a boat trip up the Rhine from the cathedral, commentary in German and English - oldest, longest, busiest, highest etc.  2000 years of history, check out the cathedral and the adjacent Roman museum, plus it has a chocolate museum, so pretty much the perfect weekend break.  Students of urban planning should come and see how to do it.  Cheap to park as well, 1€20 for an hour right by the cathedral.
A month or two back I visited the Museum of Welsh Life in Cardiff (Amgueddfa Werin Cymru), and just down the road from Gemünd near Kommern is a very similar German version.  Park at the bottom and walk up the hill, and there among the trees are little clusters of half-timbered wattle and daub houses from up and down the Rhine, preserved as they were before the coming of the 18th century..  They have a working wood-fired bakery where they bake the bread they sell on site.  Chickens and geese wander round the villages, but the pigs are confined to their sty which is probably just as well.  The occasional member of staff wanders round in historical costume, the effect spoilt only by the occasional squawk of the two way radio. They are building a new village covering the period from the 1950s to the 1970s, which makes me feel very old.  You can eat on site, but we went down the hill to Kommern, a living village of, er, half-timbered wattle and daub houses, and had a very nice Greek meal in the restaurant’s tiny shady courtyard.
Drove back to France via Maastricht in the Netherlands; lots of clothes shops for those that like them.  But the main square was blocked off as they were setting up stalls for a forthcoming antiques fair, so the pavement café atmosphere was spoiled for me.  I was surprised that the tourist information office actually charged for a map of the town; everyone else in Europe gives them away for free.  And the swish new Vrijthof underground car park beneath the main square charged more for an hour than Köln did for four.
Posted by Jack at 14:44