Time Management for the DBA

I find Outlook is very good for time management.  I dare say there are other programs out there which do much the same, and maybe even do it better, but the chances are that Outlook is already on your desktop for emails, so you might as well use it for Tasks as well.
Create a task for everything you have to do – transfer all the post-it notes, scribbles in the corner of a meeting agenda, stuff like that, to Outlook tasks.  Usually one line is all you need, maybe even just a couple of words.  Sometimes you want more than that – Outlook has a details box that is pretty much unlimited in size (as far as I can tell).   I think it might fall over if I tried to put more than one chapter of my novel in there...
Suppose someone sends you an email asking you to do something a couple of weeks from now.  Rather than transcribing it to your Tasks, you can right click on it, select Follow Up, then hit tomorrow, next week or custom (to put your own date in).  Then on the day you select, it pops up with all your other tasks for that day.  In the meantime, you can forget about it.
The same with tasks - I have a database that the HR department haven't quite finished with.  (They buy a million dollar PeopleSoft HR system, all shiny bells and whistles, but they still want to keep the old clunky one just in case people ask them for the data it contains.  And they don't want to transfer it to the new system because that would cost money, time and effort.)   Anyway, in three months time I have it scheduled for review.  It will pop up on my list of things to do, I'll stroll upstairs and ask the HR bod if he still wants it, he will hum and haw and say yes, better keep it for a while longer, and I will change the date to remind me in another three months time.   No worries.
Some things recur – weekly, daily, monthly, annually, whatever – Outlook lets you set up a recurrence and they will automatically come round again.  Even things you do routinely every day – put them on your list because then you can tick them off and you have evidence that they have been done.  Dead easy.
Then you can specify a high, regular or low priority – I usually leave them all at regular unless something really is high.  If everything is High priority, then that’s regular. 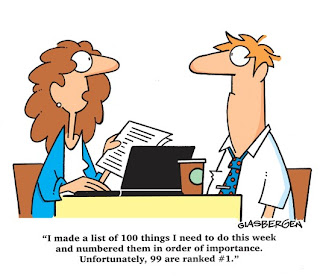 If you want to prioritise in a more granular way, put a number at the beginning of the subject  - for example: #1 Check backups.  Outlook will sort by date, by priority, and by subject.  Remember the days when computer programs had lines in them?  You could say 10, 20, 30 instead of 1,2,3, which makes it easy to insert a #15 task if you want to.  I don’t bother, I’m not quite that anally retentive.
It’s now under control and you can choose what you want to do next.  Usually you do the high priority things (if any) and #1 things first, then #2, then #3, but that’s up to you.   I have some #9 things on my list which I sometimes do because I’m in the mood.  #9 Check out ski webcams is a good one to do at lunchtime
If you decide something can wait a week, change the date – Outlook will remind you about it next week.
When you finish a task (because you are just organising yourself here, you still have to actually do stuff) you can use the details box to record what you did.  Tick the box that says Completed.  Why?  Because you now have a record of what you were meant to do, what you did and when you did it.  If the boss asks you for a list of achievements, just give him your completed tasks list.
You can assign a task to someone else – you’ve done your bit, now you can pass it over.  Or maybe you can delegate something you do regularly to the new Junior DBA – that would be nice.  Outlook will tell you when the new guy has completed the task.
And another thing – at the end of the day, you can look at the task list and have the satisfaction of seeing that you have done wodges of stuff.  You’ve done the most important things, or at least made a start on them, and moved what's left to tomorrow.  You’ve done the daily recurrences which are probably fairly important or you wouldn’t be doing them every day, would you?   And your list is now clear.  Go home with an easy conscience.
Posted by Jack at 01:40